The first show ever dedicated solely to Agnolo Bronzino, the Italian Mannerist, is now showing at the Metropolitan Museum of Art until April 18, 2010. With almost sixty drawings included, the exhibition helps to shed light on an artist whose name is familiar to many, but whose drawings of the figure may be a surprise.

Bronzino studied under Jacopo Pontormo, a Florentine painter known for disregarding the traditions of the High Renaissance, giving birth to a more personal style of rendering the figure. His influence is visible in Bronzino’s work, most easily recognized by soft, confident, defined lines and use of chiaroscuro.

Bronzino’s earlier works were more direct. His lines were shorter and more disciplined, but later became longer and more fluid. Much like the master he studied under, Bronzino predominately used red chalk in his earlier periods. With the growth of his confidence, Bronzino moved into different mediums including graphite, and harder, less forgiving black chalk.

The show is put together with the help of the Gabinetto Disegni e Stampe degli Uffizi and the Polo Museale Fiorentino, Florence and encompasses a refreshing take on the figure. Although the drawings are done largely from a scholastic standpoint, making excellent reference of the figures musculature and positioning, the works read as soft, delicate and emotional. Bronzino’s take on the figure is not only refreshing, but raises the question of how a figurative artist of his caliber escaped the public eye for so long. 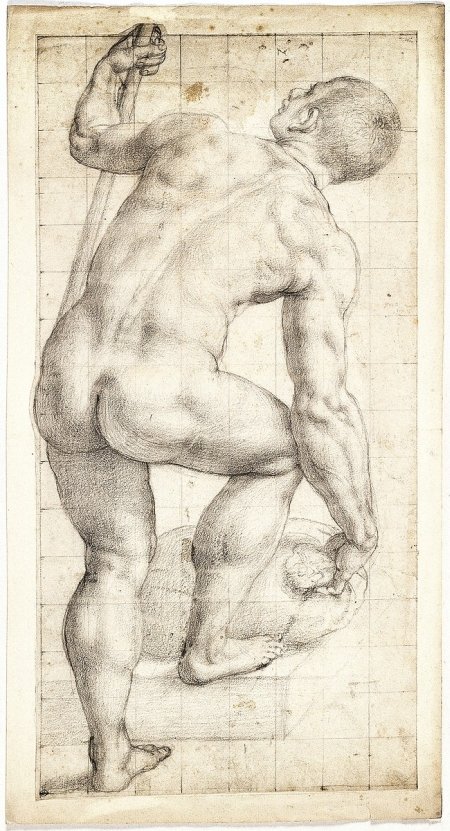 This study is unlike many of the others in the sense that this piece cannot be linked as a preliminary to any work of art. The subject’s face hidden only adds mystery to the piece.

True to his style of illustration, his images are full of emotion, and have the dramatic musculature of the Mannerist. Although one would think that stylistic phases are must rarer in sketches than in other mediums, the techniques that Bronzino employs throughout his career read as chapters in his life. Many of the works displayed were intended as sketches for other works. Being able to see the preliminary drafts, including revisions, and humanizing mistakes help us to see the progress that Bronzino made throughout his life as an artist. 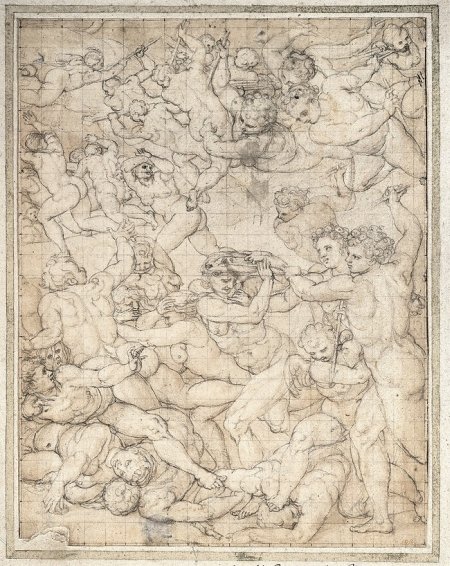 Modello for “The Virtues and Blessings of Matrimony Expelling the Vices and Ills,” black chalk, and brush with brown wash, 1565

For more information on the piece check out the Wikipedia article

Often, I receive emails promoting nudes of every kind from galleries and artists and fans of the magazine. Occasionally I am sent a link to watch a video that captures my fascination with Our Fascination with The Nude. This video is fun, and you’ve probably NEVER see anything like this.

The Great Nudes of CONTEXT art miami 2016 – Take a quick video tour of the figurative works that caught my eye during Art Basel Week here in Miami, December 2016. When the video is over, check out the galleries here: http://www.contextartmiami.com/galleries

I was never a big fan of Eugéne Delacroix. His large narrative paintings were interesting from an art history perspective, but passionless in spite of the passion depicted with all the horses and battles and such. I know that seems crazy considering his subject matter, but I just felt that human heat missing. Even with […]