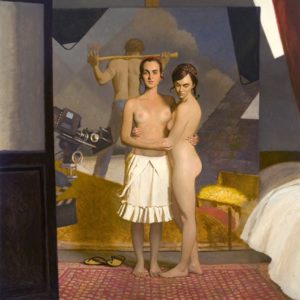 Scott Goodwillie
Visit the Gallery for this Artist >
https://thegreatnude.tv/scott-goodwillie/

Susann as “Eve, the Apple-Picker”

Here’s a great set of photos of the model Susann playing ‘Eve, the Apple-Picker” at an apple orchard location. These shots are wholesome and fun, and great references for drawing the nude female model in “normal” situations.

Suhas Tavkar: The Art of The Fingernail

Nakha Chitra is not exactly a common term in the art world, with its roots in ancient Sanskrit, Nakha meaning fingernail, Chitra means art, and Nakhachitrakar means fingernail artist. Not as simple as embossing, this is a rare Indian art form in which there is a reverse process happening, not only with the image being […]

Andrew Wyeth was a controversial icon; art lovers saw him as either a leader of American Realism or as an anachronism that Modernism must reject. I consider him one of the great contributors to the nude figure in Western Art, as he certainly produced several of the 20th Century’s Great Nudes. Andrew Wyeth was the […]