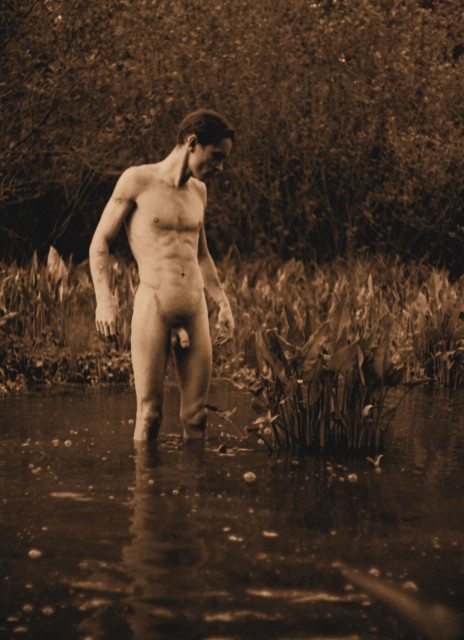 My nude self-portraits were first exhibited in my show at the Intuitiveye Gallery in Washington DC in July 1979. Here are two reviews of the show.

“His scenes are well-composed with rippling muscles and graceful lines. Higgs has been fascinated with the male body and its aging process since he studied anatomy at the Corcoran 15 years ago. He later taught himself photography and began his nude studies, using himself as a model.” – Carol Conn, The Washington Post, July 20, 1979

“J. Wayne Higgs of Hughesville, MD., has been taking off his clothes and taking pictures of his body since 1965.He seems to take his poses not just from sleazy magazines but from ancient paintings of Christ upon the cross and of St. Sabastian. Even when he strives to shock (he shows a pistol by his penis) his pictures manage to suggest a gritty kind of honesty. Perhaps its an obsession. One believes that J. Wayne Higgs believes in his art.” – Paul Richard, Art Critic, The Washington Post, August 11, 1979.

My self-portraits were included in invitational exhibit “Washington Photography in the Seventies” at The Washington Project for the Art. Also in the “Freshworks” exhibit at The Virginia Museum of Fine Arts juried by Ralph Gibson and in other art galleries in the Washington DC.

J. Wayne Higgs
Visit the Gallery for this Artist >
http://www.modelmayhem.com/portfolio/2460599/viewall

Artist Statement: The current direction of my work reverts to the exploration and experimentation experienced as a student in the 60s – those heady days of the Beatles and social and cultural change. Consequently, the materials used are more readily found in a DIY store rather than Winsor and Newton. I had initially begun working […]

Tricia Cline Ricco Maresca Gallery Previous Review (2012) It’s always interesting to see husband and wife artists whose works profoundly reflect on each other. Such is the case with Tricia Cline and Toc Fetch who not only share the same underlying philosophical underpinnings but could almost be the combined effort of one artist. The main […]

"I am Ready, my Lord" #drawing #pencilandpaper #19

Shop of Nudes at https://thegreatnude.tv/store #a

Shop of Nudes at https://thegreatnude.tv/store #a